(Note edited some stuff, particularly where I erroneously claimed that early Epic items are BTA. I meant of course BTC).

Anyone who reincarnate a lot knows the value of specific items.

Be it from things like Shadowfell or even older Epics – where Web of Chaos and even Chronosphere holds great value.

Specifically from the heroic part of Shadowfell.

Not all of the items are useful – but if you’re doing Iconic then you will find some level 15 stuff from there. Such as Sage’s Spectacles.

I’m sure you can now find similar items among the random stuff – but if you don’t got one – this will work nicely for your Iconic Deep gnome or anything Int based. And since these are autgranted on completion of the quest (end reward), it won’t take you any grinding to get it. Or why not for a melee using the Int for DC enhancement option(harper tree)?

Items that provide lore are plenty. You can easily find some kind of hand held with it. So for most casters this won’t be hard to find but it’s hard to argue against 18 percent on a level 15 item. At this stage you will most likely find 15 or 16 items – even at 20. But for classes such as Artificier this is a great item. Prior to 29 and release of the new random item scheme lore items such as these were hard to come by outside hand helds. You can for sure craft them, but that usually digs into other hard to slot things like trinkets. Now you can find lore on rings so it’s not all that rare to find an all force based ring that easily fits into any build option – but for those that don’t have one yet and for anyone that want to maximize lore – this is definitely top notch for level 15.

Heroic Green Steel is of course still very much the staple – but there are a bunch of heroic things from later packs that starts to budge into this a little. Not to mention new random items.

Like the Set from Update 28. It’s ‘almost’ like the Abashai set in that it provides several layers of set bonuses. Both as a pair or as 5 pieces. 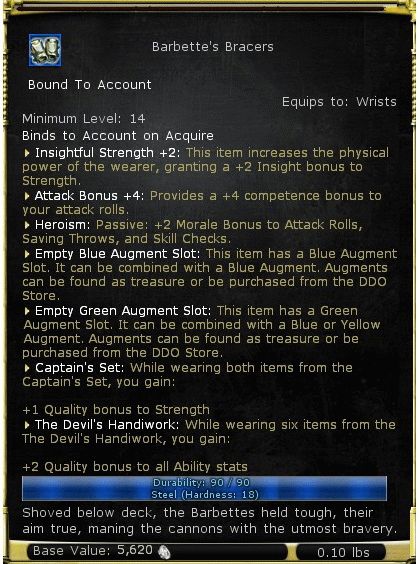 Such as this item. As a pair (boots and bracers) it adds another +1 Quality Strength. If you have 5 items all stats get +2 Quality to all ability stats.

That is certainly not bad. Considering that the Abashai set only adds a Sacredh bonus to specific stats (such as Strength and Con) . Match this with a random item (or crafted) that provides +6 in say strength and you have in effect +10 (6+2+2).

You can also find a few nice heroic items in  Update 29. These are great items that allow you to fill in the blanks where you might not have or need the set from Update 28.

And once you hit 20 you got things like the Abashai set which is perfect for melee and caster alike followed by many items at different levels from Menace of the Underdark. At 20 (such as the commendation turn in items with triple set bonus), 21 thru 23 for a host of excellent early gear followed by a spread of items until you start getting into the latest updates on the upper end (Epic Macabre, and some of the Epic items from 28 and 29).

And if you’re looking for excellent weapons look no further than to either Heroic Green Steel or the new items from Update 27. Such as Bleeding Edge or even the greataxe. 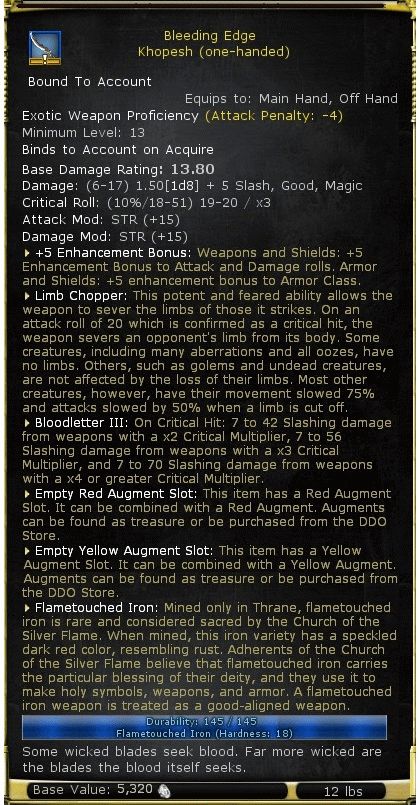 Altho if you’re looking for single hand melee items then I do like the excellent Cannith Challenge items. As long as you don’t triple tier upgrade them they’re BTA and very nice. 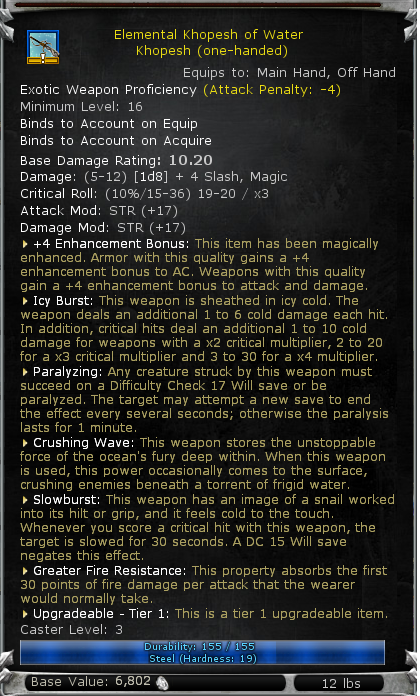 I like this one because of both the resist but also the paralyzing effect. And the robe – a great item for casters and melee have a freezing ice effect that can proc.

Again – keep it BTA and you can create greataxes, rapiers and this khopesh and have an assortment of terrific item without doing some significant grinding for BTC green steel items and such.

And for the early Epics it’s hard to argue against Cannith challenge items. Something I’ve discussed in the past. It is also what I’m using now for my Deep Gnome. Such as the Epic clothing, boots and cloak. Altho I confess I’m hoping to pull a scroll for the Robe of the Diabolist instead since that is a great int based item.

2 thoughts on “Reincarnation and Epic, the toys of the trade”